Clint Eastwood, Oprah Winfrey, Angelina Jolie and many more Hollywood A-listers have all indulged in the exquisite dishes of celebrity chef Jack Lee. The award-winning culinary artist has traveled around the country and the world serving his famous $100 egg roll and other savory Vietnamese cuisine to everyone from celebrities to charity organizations, including a recent catering at the March of Dimes Inland Empire Signature Chefs Auction on Nov. 6.

Chef Lee shared some insight into what makes him tick in the kitchen and beyond:

As a chef to the stars, who has been your all-time favorite celebrity to cook for and why?

While working in Hollywood I had the chance to cook for some of the most famous actors and actresses alive, as well as celebrities in all arenas. One of my proudest moments however was cooking for singer Demi Lovato, because this opportunity came when I was already working back in Vietnam. I cooked for Demi while she was visiting Saigon, and had the chance to show off some of the amazing cuisine of my home country as well as the fusion dishes I have created based on the unique ingredients available there. It was an honor that she was blown away by the flavors of Vietnam.

If you were forced to make only one dish for the rest of your career, what would it be?

The humble egg roll sold on the streets of Saigon is one of the most perfectly balanced dishes in the world. I made a name for myself serving this simple dish made with the finest quality ingredients when I released my $100 egg roll back in 2011. I would be totally satisfied spending the rest of my career devoted to this authentic Vietnamese staple.

What is the most luxurious or oddest ingredient you have used in a dish before?

What is your secret to success as a chef?

I never stopped. I have been working in restaurants since I was a kid helping family, and when I was in school I started a business catering for guys in my class who wanted to impress their girlfriends. I was so persistent that I worked in the prestigious Bel Air hotel for a year as a volunteer until I had proved myself well enough to deserve a job as banquet chef. If you keep moving forward, you’ll get where you’re going somehow.

What is your best advice for aspiring chefs?

Persistence is key, as I said above—but you also have to keep learning. I took some intensive courses to improve my knowledge, but even when I was working at Bel Air I never stopped learning. There were always international chefs passing through our kitchen to learn what we did, and I always took the opportunity to pick up as much as I could from them as well. It gave me the knowledge to create dishes with influences from all over the world.

What has been your most treasured moment of your career thus far?

Catering for the Oscars with almost no advance notice and an extremely limited budget—and we pulled it off! One of my most unforgettable experiences with all the glamor of show biz and the magic of fine dining, all set against the high-adrenaline panic of catering deluxe cuisine on the fly!

When you were young, what did you want to be when you grow up?

I was a lonely immigrant kid who didn’t understand English well, so I spent a lot of time watching TV. My favorite show was Three’s Company, and I really admired the character of Jack Tripper, played by the late John Ritter, who played a comedic chef. I wanted to be just like him—that’s why I call myself Chef Jack Lee.

For more info on March of Dimes, visit: marchofdimes.org

For more info on the March of Dimes Signature Chefs Auction: signaturechefs.marchofdimes.org

Jackie Moe is a professional entertainment reporter and editor who lives for live music, spaghetti, beef ribs, long distance running, and good stories. Working as a features reporter for major newspaper publications Orange County Register, Press-Enterprise and Los Angeles Times, and as an editor for a variety of magazines including OC Business Journal, Inland Empire Magazine and Parenting OC, she recognized the need for quality digital coverage for all of the truly fascinating people and events in and around Orange County. She created Backstage SoCal in 2017 to provide unique entertainment content beyond the general calendar items. You may contact her directly on her social media or email: socalnewsjackie@gmail.com

Young ABT dancer returns to dream role in ‘The Nutcracker’

Jitters vs. Depression: How to recognize the difference 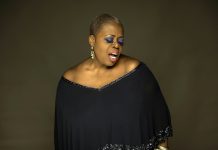